Begin typing your search above and press return to search. Press Esc to cancel.

As mentioned in an update to last week’s post about the new edition of the Philosophical Gourmet Report (PGR), a ranking of the reputations of some PhD programs in philosophy, one of its editors, Berit (“Brit”) Brogaard (Miami), has announced that she is no longer associated with it. A statement made this evening by her and Carolyn Dicey Jennings (UC Merced) provides a partial explanation. 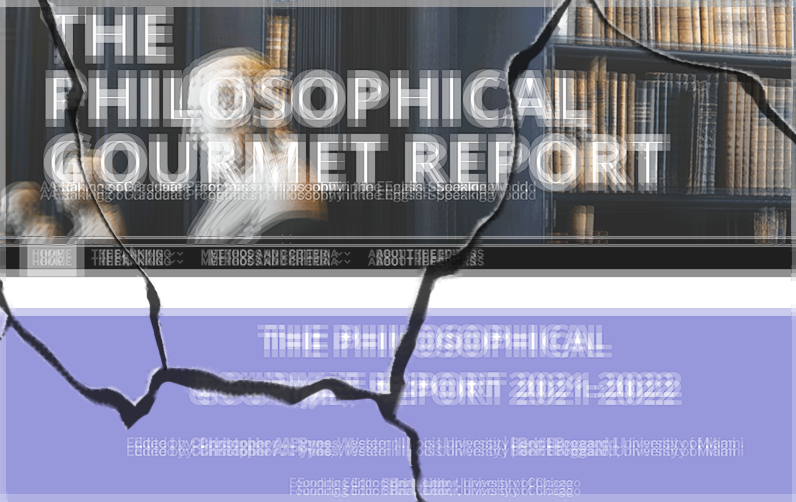 In short, Brogaard says she was “excluded from any PGR-related decisions”—including the decision to publish the current version of the report—when her co-editor Christopher Pynes and Will Croft from Wiley (the publisher of the PGR) found out that she was a member of the APDA board of advisors.” APDA (Academic Placement and Data Analysis) is a guide to philosophy graduate programs based on job placement data and student experiences, originally created by Jennings (related). Brogaard and Jennings write that it is unclear who currently “has final say” over the PGR.
Some background may be useful. In 2014, over 600 philosophers signed a letter, known as “The September Statement,” saying that they “pledge not to provide volunteer work for the Philosophical Gourmet Report under the control of Brian Leiter.” Leiter (Chicago), had created the PGR in the 1990s, but the philosophical community increasingly objected to the hostile and insulting behavior he exhibited publicly on his influential blog as well as in private, unsolicited correspondence. In October of 2014, Leiter agreed to step down from the editorship of the PGR, naming Brogaard as his successor, and saying that after the 2014-2015 PGR was published, “Berit will take over as editor until such time as a co-editor can be appointed to assist with future iterations of the report. After 2014, Berit will have ultimate decision-making authority over the PGR.” In 2017, Brogaard brought on Christopher Pynes (Western Illinois) as a co-editor of the PGR.
Brogaard and Jennings write:
In November 2021 Brit’s co-editor Christopher Pynes told her that her involvement with the APDA board of advisors was inappropriate. She then received a message expressing a similar sentiment from Will Croft from Wiley. Brit communicated her perspective to both Christopher and Will on this issue in late fall 2021. She emphasized that there was no conflict between the projects and that the APDA was not competing with the PGR but was gathering supplementary data on placement. Instead of honoring Brit’s role on the APDA board of advisors and taking her suggestions seriously, Christopher and Will completely stopped communicating with her, leaving her in the dark, and they have now published the report without her final approval. Clearly, she did not have “ultimate decision-making authority,” nor even the level of authority one might expect from a co-editor. Instead, it appears that someone else has final say over the PGR.
Brogaard and Jennings were seeking to work together to make use of “placement data and other scientifically-grounded empirical measures to supplement the PGR project.” They write:
We had hoped for better for philosophy: a way of evaluating our field that is less divided and toxic. We thought that a potential future collaboration between the APDA and the PGR “might be healing for the discipline,” as Carolyn put it in the APDA board meeting. We no longer think this is possible through the PGR, despite our best efforts and intentions.
To my knowledge, no members of the PGR’s Advisory Board have commented publicly on Brogaard’s treatment, or otherwise recently discussed any issues concerning its leadership.
Meanwhile, Brogaard and Jennings are interested in figuring out how to best help prospective graduate students in philosophy, and solicit your suggestions:
We don’t want to dwell on past grievances. Instead, we want to move forward and try to find a solution that works for all of us. APDA collects and reports on some data about the profession, but it does not have the resources to be the only major source of information about graduate programs, and it isn’t clear that we would want just one project to do that. How can we, as a discipline, provide useful information to prospective students and the field at large in a way that reflects our values as a diverse group, without putting all this power in the hands of one or two individuals? We hope that if you are reading this that you, too, want this. So we would like to hear from you as we consider these issues moving forward.
Their whole statement is posted at the APDA Blog and below (with permission).
Statement by Berit Brogaard and Carolyn Dicey Jennings, originally published at the APDA Blog
UPDATE (1/11/22): Christopher Pynes has authored a response to Brogaard and Jennings. An excerpt:
On September 27th Professor Brogaard informed me of her APDA advisory board membership, which she equated with our PGR co-editorship.  The contract Brit and I signed with Wiley-Blackwell has always included a non-competition clause, and based on the contract language and Brit’s characterization of her work with the APDA, I believed this work violated that contract.  As such, I asked Wiley-Blackwell to review our contract and advise us on how to proceed. Wiley-Blackwell determined Professor Brogaard’s work on the APDA did violate the non-competition clause in our contract. My only concern was ensuring the integrity of the PGR and our work on it.
Until a few days ago, I was under the impression that Wiley-Blackwell was negotiating with Professor Brogaard on how to move forward as an editorial team.  I emailed Dr. Brogaard as recently as November 4th, asking if she could attend to some editorial matters with the advisory board.  She wrote back that she would. She hasn’t communicated with me since, and I subsequently worked with the Advisory Board to produce the 2021-2022 PGR.
You can read the whole response at Leiter Reports.
COMMENTS POLICY